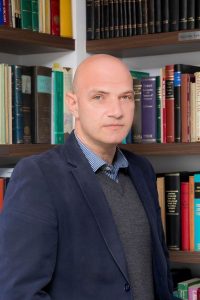 Dr. Kourtellos has extensive experience on civil and commercial litigation before the District Courts and the Supreme Court of Cyprus with a particular emphasis on commercial, corporate and shareholders’ disputes, fraud and conspiracy issues. He has a broad commercial background and he is also engaged in advising on issues related on Cyprus International Trusts and Investment Services.

He has also handled numerous cases in relation to administrative acts concerning matters of administrative, tax and constitutional law and he has been consulted to give opinions on different aspects of Cyprus law, especially with respect to cases involving complex multi-jurisdictional issues, arbitration law and has been engaged in a number of high profile cases.

Prior to establishing P. N. Kourtellos & Associates LLC, Dr. Kourtellos worked as an associate lawyer in Andreas Neocleous & Co, from 1999 till 2004, he later joined Patrikios Pavlou & Associates LLC where he became corporate litigation partner till 2011.

Dr. Kourtellos in addition to maintaining his own law practice is also an Associate Lecturer at the University of Cyprus (Department of Law) teaching Equity & Trusts, Philosophy of Law and Legal Method.

Co-Author of “Introduction to Cyprus Law” (Chapter 2: “Constitutional Law”) published by Yorkhill Law Publishing under the auspices of the Center for International Legal Studies Salzburg, Austria, 2000

“Introduction of the European Markets in Financial Instruments Directive (MiFID) into the Cyprus legislation”, March 2008

“The Implications of the Third Money Laundering Directive, The Cyprus Perspective”, June 2008

Co-Author of the Cyprus Chapter on the “Comparative Study on the Situation in the 27 Member States as regards the law applicable to non-contractual obligations arising out of violations of privacy and rights relating to personality”, in association with the University of the Basque County prepared for the European Commission, November 2009

Co-Author of the Cyprus Chapter on “Product Liability” 2011 edited by the Global Legal Group.