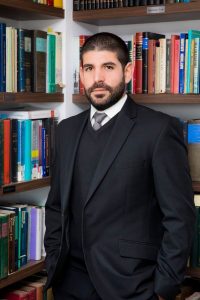 Loukas has obtained his law degree from University of Leicester. In 2010 he commenced his postgraduate studies at De Montfort University Leicester where he successfully completed his LLM in Business Law in November 2011. He was admitted to the Cyprus Bar Association in 2012.

He joined the firm in mid-2016, after 5 years of practicing law as an associate lawyer in a major litigation firm. His practice focuses on civil disputes with specialization in commercial and corporate litigation. He also advises on matters of banking and finance law, torts and general civil law.